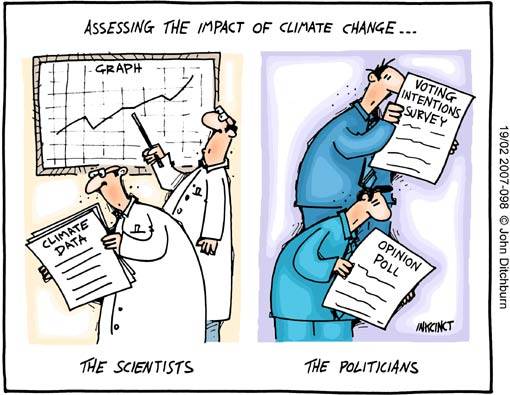 What the Australian public thinks about climate change matters. While the work of proactive businesses, governments and activists is important, public opinion ultimately creates the environment in which climate action can occur. Politicians won’t take strong climate action if the public will vote them out for it, businesses won’t take strong climate action unless there are markets for their products and services and activists that don’t bring the public with them risk being marginalised.

So, I’ve compiled a list of the key resources I’m aware of that investigate Australian public opinion on climate change. I will continue to update and add to this over time, so if you are aware of other resources, please get in touch through the comments or my contact form.

In 2011, Zoe Leviston and colleagues at CSIRO did a review of Australian’s views on climate change for the Garnaut Review. Surveys and polls of public opinion ask questions in different ways, which makes direct comparison between results difficult. Nevertheless, Leviston et al. found a general pattern in the results.

Third, concern about climate change has decreased since the peaks reached in 2006 to 2007. This is best illustrated with the following chart from the annual Lowy Institute Poll, which has tracked concern about global warming in Australia over time. In 2006, almost 70% of Australians agreed that global warming was a serious and pressing problem and they showed willingness to take action even if significant costs were involved. The proportion fell over time to a low of less than 40% in 2012, before recovering slightly in the last two years.

Below, I provide brief summaries of some of the key resources available on climate opinion in Australia.

First conducted in 2010, this survey has since been done annually. The most recent survey (done in 2013) involved more than 5,000 participants, including more than 2,000 that had previously done the survey (in at least one other year). The survey asks about attitudes to climate change, behaviours, people’s projections about climate change and sense of vulnerability, and what they think others think about climate change. The survey also tracks changes over time.

One of the most interesting aspects of this ongoing research is that it reveals the inaccurate views Australians hold about the rest of the public. Fewer than 8% of respondents believed that climate change was not happening at all, but these respondents estimated that almost 50% of the Australian public would share their view. Indeed, there was a general tendency to overestimate the prevalence of the view that climate change is not happening. This may reflect the media’s tendency to present climate change as a matter of debate and conflict rather than settled scientific consensus.

The Lowy Institute conducts an annual poll on a range of issues related to Australia’s place in the world. The poll includes a small number of questions about climate change and provides annual data since 2006, showing changes in concern about climate change in the Australian public over time. The polling data shows a clear decline in concern between 2006 and 2012, before a slight increase in concern in 2013 and 2014.

The most recent poll asked an interesting question about leadership on climate change, with results shown below. A clear majority of 63% thought Australia should be taking a leadership role on reducing emissions rather than waiting for an international consensus. 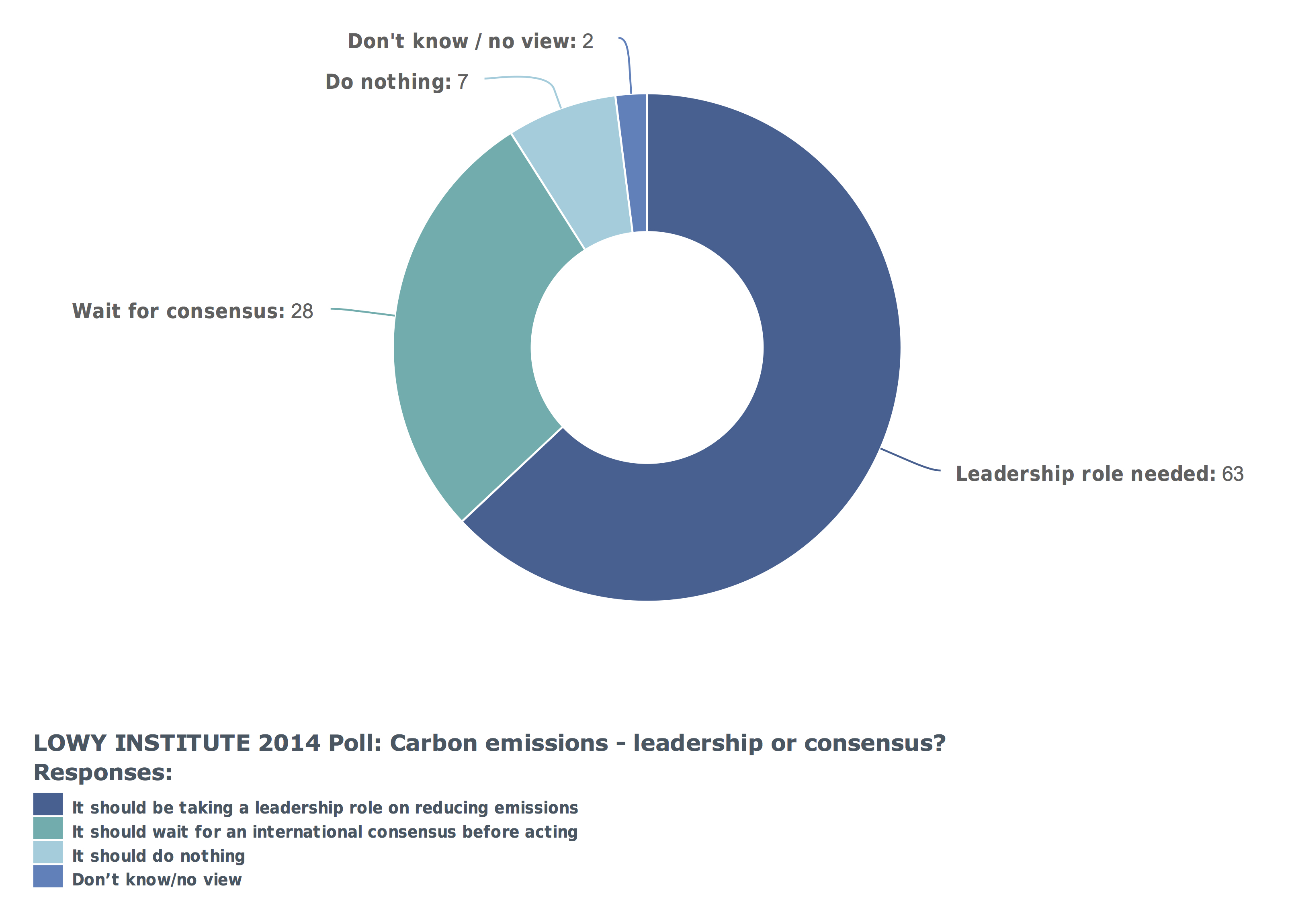 Climate of the Nation

The Climate Institute has conducted research on Australian attitudes to climate change, related policies and solutions since 2007. The Climate of the Nation reports have evolved over time to provide a rich multimedia resource on public opinion. I wrote about the 2012 release previously on this site. The report is accompanied by fact sheets, info graphics and VoxPop videos of people on the street talking about climate change. 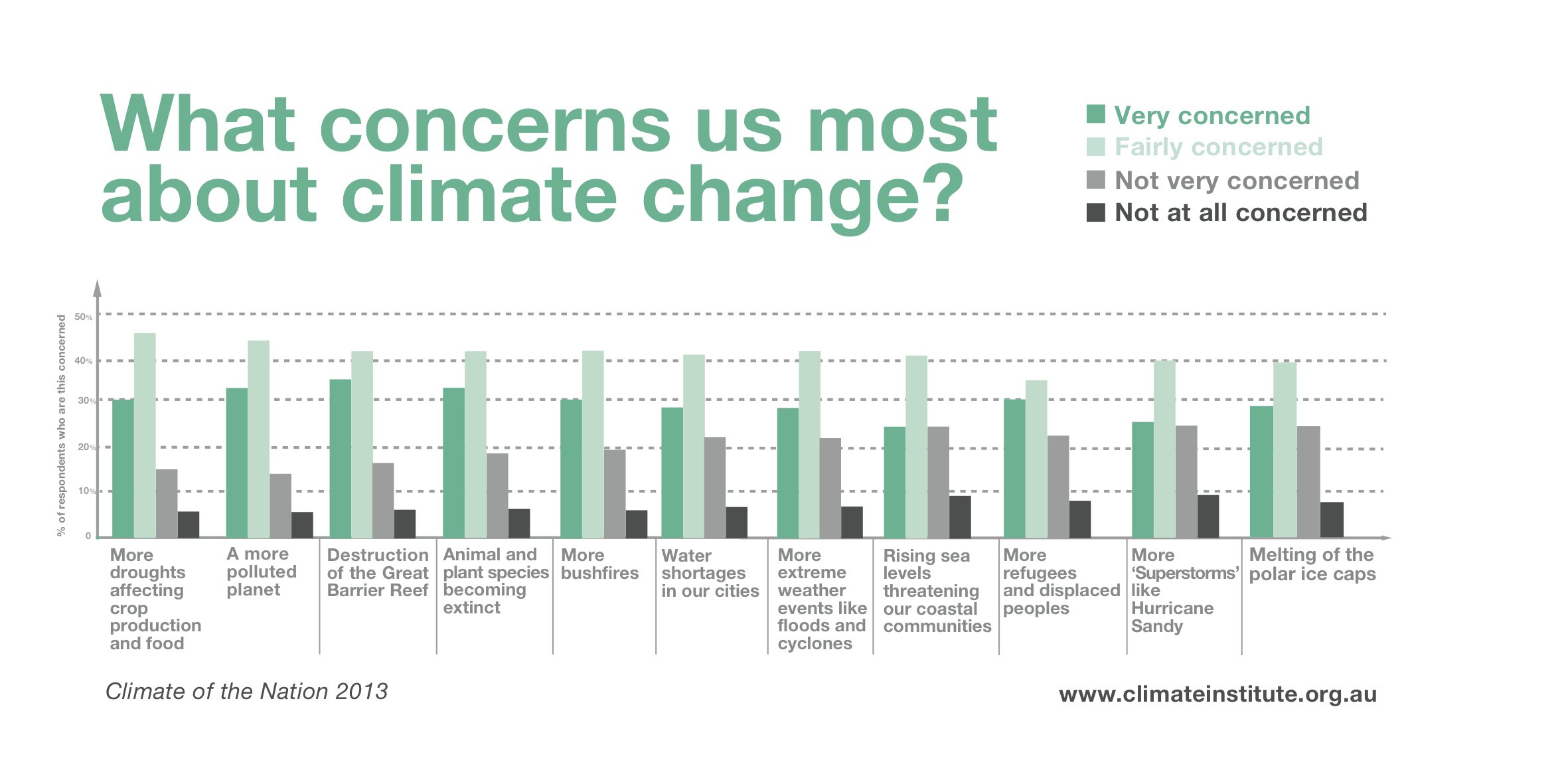